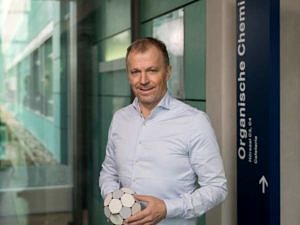 Andreas Hirsch received his Ph.D. in 1990 from the University of Tübingen. From 1990 to 1991 he was a postdoctoral fellow at the Institute for Polymers and Organic Solids in Santa Barbara, California in the group of Prof. Wudl. He subsequently returned to Tübingen as a research associate at the Institute for Organic Chemistry. Upon receiving his Dr. Habilitus in 1994, for which he was honored with a variety of prizes and awards including the Otto -Röhm Research Award (1994) and the ADUC Award für Habilitanden (1994) he joined the Chemistry Faculty at the University of Karlsruhe as a Professor of Organic Chemistry. Since October 1995, he has been chaired Full Professor of Organic Chemistry at the University of Erlangen-Nürnberg. In 2004 he became Adjunct Professor at Rice University in Houston. He was Visiting Professor at the University of Cyprus (2006) and the University of Padova in Italy (2011). He is coordinator of the Graduate School Molecular Science (GSMS), the Interdisciplinary Center for Molecular Materials (ICMM) and the Collaborative Research Center “Synthetic Carbon Allotropes” (SFB 953) in Erlangen. He is on the Board of Directors of the Cluster of Excellence “Engineering of Advanced Materials” (EAM) in Erlangen and the Central Institute for Materials and Processes (ZMP) in Fürth. In 2006 he received the Elhuyar-Goldschmidt-Prize of the Spanish and German Chemical Societies. In 2007 he was elected Professor of the Year (Unicum, Beruf, Germany). In 2010 he received an ERC Advanced Grant and in 2012 he received the Max Grundig Award and the Medal of the Organic Institute of the Academy of Sciences of the Czech Republic. In 2017 he became an elected member of the “Bayerische Akademie der Wissenschaften” and received a second ERC Advanced Grant. Hirsch’s laboratory has been pioneering and is at the forefront of carbon allotrope chemistry and is well known for the investigations of basic principles for the functionalization of the 0-dimensional fullerenes, the 1-dimensional carbon nanotubes and the 2-dimensional graphene, which lead to synthesis of numerous examples of derivatives with tailor made structural-, electronic-, photophysical- and biomedical properties. These studies are also extended to new 2D-materials including black phosphorus and transition metal dichalcogenides.